Plant a tree in memory of Dominick
An environmentally-friendly option 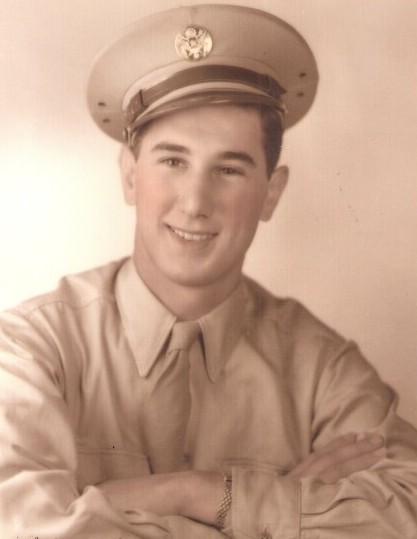 He was born in Bridgeport, Connecticut on September 8, 1926 the son of Domenico and Antonia Pento.

Before entering the war at age 18, Dominick (aka “Dom”) owned and operated a concession stand at the local bowling alley in Bridgeport, Ct.  He worked briefly in Puerto Rico at an orange juice factory.

Dominick was a proud U.S. Army Veteran serving during WW II in the 3164th Signal Service as a Technician Fourth Grade in the Pacific Theater/Asia, specifically in Saipan.  Dominick always spoke of his elder brother, Nicholas D Pento, who was killed after surviving Bataan.  Nicholas was killed at sea on 24 Oct 1944, during the sinking of the Arisan Maru.

Following the war, he made his career at the United Illuminating Company (UI), which was one of two electric generation and supply companies for the State of Connecticut.  He donated more than 10 gallons of blood to the Red Cross over his time at the UI.  He was involved in appliance repair, electric meter installation, training new technicians on the job, and was a union representative for his team which operated out of the Milford, Ct branch of the UI.  He married Mary Jane Scalo in Sept 1947.

Some of Dom’s favorite pastime were, gardening and plants, home construction and architecture, reading, equities/finance, and science/inventions.  His motto was: “Nothing is more important than your family”.

He is survived by his beloved wife, Mary Jane (Scalo) Pento; his loving son, Robert (Jennifer) Pento; his cherished grandchildren, Hannah, Grace and Cole and his brother, Vincent (the late Kathy) Pinto.

Cremation rites will be accorded privately. His cremains will be inurned at Abraham Lincoln National Cemetery in Elwood, Illinois at a later date.  Any donations can be made in his memory to the “Tunnel to Towers” Foundation (https://tunnel2towers.org/).

Online condolences may be expressed to the family by clicking on Tribute Wall.

Arrangements are under the Care of Willow Funeral Home & Cremation Care in Algonquin.

Plant a tree in memory of Dominick by clicking here.
To send flowers to Dominick's family, please visit our floral store.

A service summary is not available

Plant a tree in memory of Dominick
An environmentally-friendly option

Plant a tree in memory of Dominick

2 trees planted in memory of Dominick

Mary Jane and Family:
Tom and I are so very sorry for the loss of your beloved husband, Dom, as well as  the fairly recent loss of your brother, Jim (Skippy).  We send you our prayers. Love you.
Linda Scala Vargo

So sorry to hear at Uncle Dom. If there is anything I can do, let me know.

Dear Mary Jane,  I am so very sorry for your loss.  Two in such a short time.  You were blessed  to have  such a great husband and close family.  Please if you ever come  back email me so we can get together. .  I hope you are feeling well. So sorry again,  Barbara M. Carbone

Dom I only took care of you for a week but I was so happy to be part of your family for a short period of time. You were so kind to me so as your wife and I can never forget your kindness! You were always concerned about me if I’ve eaten already or the room temp for me is fine. May you Rest In Peace with our Lord Jesus Christ! ❤️ Czeska (your former caregiver)

I am so sorry for your loss. My sincere condolences.

A Memorial Tree was ordered in memory of Dominick J. Pento by Lea Kulapaditharom.  Plant a Tree

Plant a tree in memory of Dominick